Strategy board games usually require you to take actions and the players that take the best actions most efficiently will win. Most strategy games will not only start players with the same set of actions to choose from, but also the same number of actions. Then through decisions of the players, the options and number of actions expands as the game progresses.

The list that you choose to bring predetermines the number of actions you can take. If you take a list that is five deployment cards with one miniature each you have five activations and ten actions you can take every round. If a game lasts four rounds that means you only gave yourself 40 actions for the entire game. That number is actually an estimate since your figures will be dying as the game progresses, giving you fewer actions, even if some command cards, like Son of Skywalker, give you extra activations. Four rounds is about how long a skirmish game goes. Most games are decided by the end round three, either because a player gained all the points needed for victory or because the game overwhelmingly favors one player that victory is all but certain.

So one of the most important choices of the game happens before you even play. How you make your list determines what you can do. If you don’t give yourself enough activations or actions relative to your opponent, you can be hosed before the game even gets going.

The acceptance of this truth is the first step to playing better skirmish. It’s at the heart of the game. The squad I brought to my first skirmish games was built around my favorite Star Wars heroes—Han Solo, Luke Skywalker and Chewbacca. My first list was a blast to play, but could not stand up to more competitive lists. My first list was built around these bad boys, but it rarely won.

The problem was that Han Solo and Chewbacca were so expensive to field that I that couldn’t bring that many additional deployment cards. I was only bringing four deployment cards compared to my opponents seven or eight. This meant that I had almost half as many activations as my opponents—they could just do more than me. Worse, they often had more than twice as many available actions to take because their activations included multiple miniatures not just one. This meant they could take objectives easier and pile on a bunch of attacks on Han or Chewbacca. Worse they could save their best figures for last after I activated all of mine, giving them more strategic options to take. I had to give up my emotional connection to my favorite heroes if I wanted to win. As painful as it was, I did. But it opened up the game to me in a way that I now have more fun.

Early on in the game the lists that brought the most activations, typically eight, would usually win. It got so bad the developers actually had to make a new pass rule to remove some of the advantage. If you have fewer ready deployment cards than your opponent you can pass that turn.

As the game has progressed there are more options in list building that give you greater flexibility in getting more activations in. Cheap options like the Alliance Smuggler or Hired Guns help broaden what you can do. Also it seems as the developers are making some of our  loved heroes and villains cheaper. Now you can play more of your favorite heroes and even win with lists that have five or six activations.

So if the situation is improving, what’s the point of starting on this topic for an Imperial Assault skirmish beginner strategy guide?

Well you still want to keep all of this in mind. You determine all the actions you can take to a game beforehand. When building a list, if you figuring out to do with your last three or four points, consider taking on an additional deployment card rather than upgrading one you’ve already chosen to an elite figure. An additional activation can be better than the extra health or ability gained from an elite figure because of the extra actions. This isn’t hard and fast, but for a beginner it’s a good guide to get you started.

Next, when making a command deck, take in any command cards you have available to you that will give extra attacks or activations. I’ll write more on this later, but these are the best command cards because they give you more of the most precious resource in the game—actions! If you play Luke, take Son of Skywalker for an extra Luke goodnes. 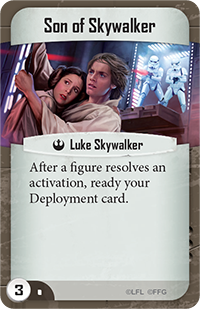 Auto-include if you field Luke Skywalker.

The card is so good, some top Rebel lists right now are built around getting it played two or three times in one game for a win.

Finally, it’s helpful to get a feel for what the value of an  activation and actions by playing with lists that give you tons of them. Then follow up with lists that more constrained. You’ll immediately notice the difference and appreciate the freedom more actions and activations give you. More importantly you can determine based you on your play style what you naturally play better with.

Of course make sure you always take a list you have fun with. You don’t want to take something that may be good, but you won’t enjoy playing with. But balance it out. It is hard to enjoy a tournament if you go 0-4, even with a fun list.

Once you have a good understanding of how many activations and actions you prefer for your play style you can take the next step which is to maximize them. The game is really about making the most of the actions you have given yourself, so there are many ways to maximize and make those actions as efficiently as possible. One way is choosing your activation order wisely, which this great beginner guide covers, and which I’ll touch on in future articles.

If you enjoyed the article, disagree with anything or want to share your own stories, do so in the comments! If you want to see anything else in the Imperial Assault skirmish beginner strategy guide, let me know!