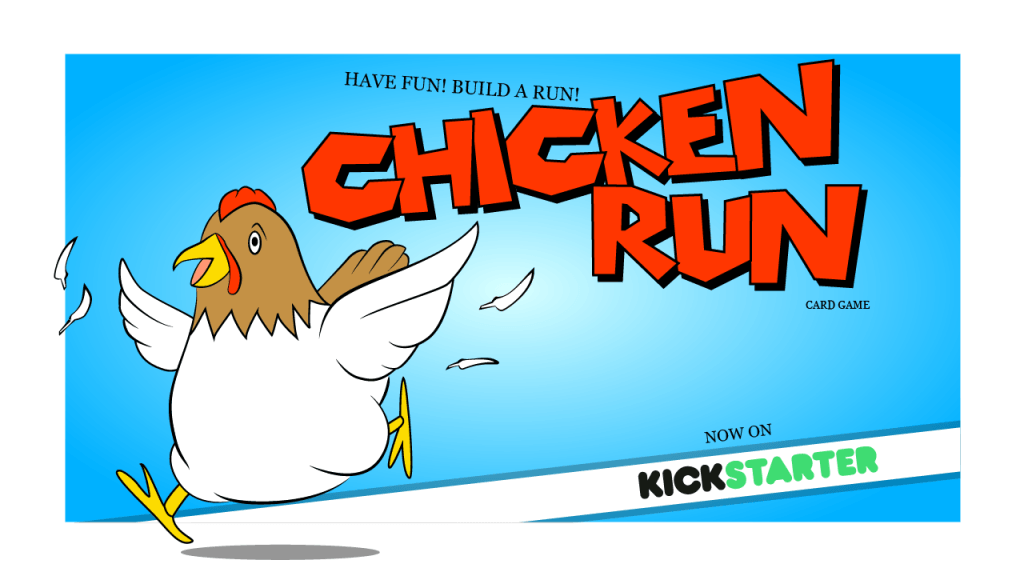 We have another opportunity to highlight a locally designed board game now on Kickstarter. The game is Chicken Run by Pround Games. Owners Josh Campbell, Brennan Clark, Bryan Todd, and Cameron Frank come out to our Oklahoma Board Game Community events and we definitely want to share this with the community, especially since some of you may have even helped in its creation!

Dave: From your Kickstarter page, I can tell Chicken Run has a very fun feel to it. What kind of experience will this game give players? Will I be able to burn some friendships when I play pesky varmints?

Cameron: Absolutely. We are a pretty competitive group, and we all get a sordid satisfaction about playing a weasel or fox at just the right (or wrong) time. I don’t hold back if I have multiple varmints I want to play against Bryan, but I was definitely more hesitant about dropping the hammer when playing with my aunt. During play-testing, we knew if people were red in the face after someone dropped a double snake on them, that we were doing something right. If people are invested enough in the game to get angry, we know we’ve done our job and the players have really bought in.

Dave: So walk me through how you ended up with this set collection game.

Cameron: When we finally started to brainstorm Chicken Run, originally named Eggs in a Basket, it was the closest idea to a finished product we had. We had been working on another game that kept having major roadblocks and speed bumps in finishing the game play so we halted it once this got brought to the table. Josh had the overall game play in order, matching chickens and such, but the four of us set out to make it our own by adding some rule changes, new card ideas, and stronger player interaction.

It was a very laid back development process; we decided from the very beginning that we don’t know where Chicken Run is going to end up, but if it ends up simply being a game the four of us enjoy playing and goes no further, we would be fine with that. So every decision with regard to game play was filtered through that lens. We changed the name once we realized that there was a distinct lack of eggs or baskets. Thus Chicken Run was born.

Dave: How would you describe the process you all went to make this game? Did you all have the skill set needed to do all of this yourself?

Cameron: Honestly, the process has not been that difficult. The four of us come from such different backgrounds: marketing, engineering, agriculture and design. So we complement each other well. Each one of us brings a different component to the group that balances the others. The most difficult part has just been figuring out how to work together as partners and friends. We all have pretty passionate personalities and we all bring value to the table, so it’s occasionally a balancing act, for sure. We have had many arguments that frankly could have derailed our company, but because of our background we knew we wouldn’t let it destroy our friendships.

Dave: One of the things that I hear is difficult to do is to get play testers to play prototypes. Did you all have a problem with this?

Cameron: This really hasn’t been too difficult as we have had a great support system. When we would tell someone that we created a card game we often would hear things as, “That’s so cool! I didn’t know people could do that!” So it was pretty easy to get people to play it just because they knew who actually developed it.

We have to give a big shout out to the Oklahoma Board Game Community. This group has been super helpful and really supportive! We try to make sure and take the game there every Thursday at Denny’s and let people play and get valuable feedback. We cannot say enough about the great help and support we’ve seen in the local community. So definitely thanks to you guys for that.

Dave: So what would you say sets Chicken Run apart from other similar games?

Cameron: We really love games like Catan, Carcassonne, and Saboteur for their strong player interaction mechanics and the ability to play as aggressive or amiable as you want. We knew from the beginning we wanted to have very strong player interaction; who wants to sit at a table with three or four other people and play your own game? A lot of our decisions came down to asking whether or not they helped or hurt player interaction. So the ability to trade, form temporary alliances (Brennan, I don’t care if I win, I just want to make sure you lose), and drop some mean varmints on someone can really help all the players to buy into the game play.

Dave:  What kind of games do the four of you like to play and how did that come into play in designing and developing the game.

Cameron: We have a pretty varied background when it comes to games as well, but there is a lot of overlap in style. I think before we introduced Brennan to Catan, the only games he had played were Texas Hold ‘Em and Monopoly. Bryan was pretty sheltered growing up in Cushing (do they even have board games there?). Cameron grew up playing Risk and Stratego, while Josh is our resident independent gaming expert.

Once we discovered the wide and varied world of tabletop gaming a few years ago, we haven’t been able to look back. We love games with strategy, lots of communication and interplay, and games that encourage strong interaction and I think that’s why we strive so hard to make sure that interplay is a strong component of Chicken Run. Our friendships have definitely developed over playing games together for the last few years, and we want to do our part in helping to share that experience.

Dave: How can people get in reach with Pround games to learn more about Chicken Run and your upcoming projects?

Cameron: We read every message we get via Facebook (facebook.com/ProundEntertainment) and Twitter (@ProundGames) so those are always great ways to connect with us. We’re also sharing our journey as we go through this process on our blog over at proundgames.com, we have new content Mondays and Thursdays.

You can find and back Chicken Run here. Don’t forget to share it with your friends if you think they’ll enjoy it. We will be giving away a copy when we get our hands on it.